Complete the form below to receive the latest headlines and analysts' recommendations for Insulet with our free daily email newsletter:

Shares of Insulet Co. (NASDAQ:PODD) have earned a consensus rating of “Hold” from the twenty-three ratings firms that are presently covering the company, MarketBeat reports. Two investment analysts have rated the stock with a sell rating, thirteen have assigned a hold rating and seven have given a buy rating to the company. The average 12 month price target among brokerages that have updated their coverage on the stock in the last year is $238.11.

Insulet (NASDAQ:PODD) last issued its quarterly earnings results on Wednesday, November 4th. The medical instruments supplier reported $0.17 earnings per share for the quarter, beating the Zacks’ consensus estimate of $0.08 by $0.09. The firm had revenue of $234.00 million for the quarter, compared to analyst estimates of $221.73 million. Insulet had a net margin of 2.20% and a return on equity of 10.96%. Insulet’s quarterly revenue was up 21.9% compared to the same quarter last year. During the same period last year, the company posted $0.01 EPS. On average, sell-side analysts predict that Insulet will post 0.33 EPS for the current fiscal year.

Insulet Corporation develops, manufactures, and sells insulin delivery systems for people with insulin-dependent diabetes. Its Omnipod System comprise two devices: a self-adhesive disposable tubeless Omnipod device that is worn on the body for up to three days at a time, and its wireless companion, the handheld personal diabetes manager. 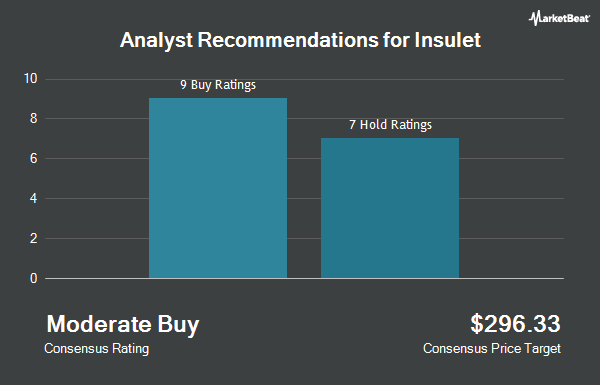 Receive News & Ratings for Insulet Daily - Enter your email address below to receive a concise daily summary of the latest news and analysts' ratings for Insulet and related companies with MarketBeat.com's FREE daily email newsletter.