Complete the form below to receive the latest headlines and analysts' recommendations for Lindsay with our free daily email newsletter:

Lindsay (NYSE:LNN) released its quarterly earnings data on Wednesday. The industrial products company reported $0.65 earnings per share (EPS) for the quarter, missing the Zacks’ consensus estimate of $0.75 by ($0.10), MarketWatch Earnings reports. Lindsay had a return on equity of 13.65% and a net margin of 8.14%. The firm had revenue of $108.50 million during the quarter, compared to the consensus estimate of $113.07 million. During the same period in the previous year, the firm earned $0.77 EPS. The business’s revenue was down .8% compared to the same quarter last year.

A number of research firms have issued reports on LNN. Boenning Scattergood raised Lindsay from a “neutral” rating to an “outperform” rating and set a $145.00 price objective on the stock in a research note on Thursday, October 22nd. Monness Crespi & Hardt upgraded Lindsay from a “sell” rating to a “neutral” rating in a report on Friday, October 23rd. Finally, BidaskClub upgraded Lindsay from a “buy” rating to a “strong-buy” rating in a report on Friday, December 18th. Three equities research analysts have rated the stock with a hold rating, one has given a buy rating and two have given a strong buy rating to the company. The company has an average rating of “Buy” and an average price target of $108.25. 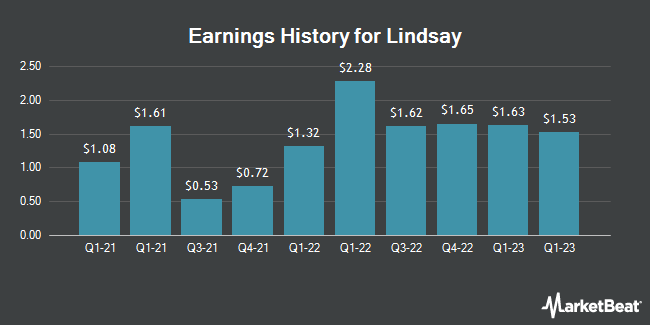 Receive News & Ratings for Lindsay Daily - Enter your email address below to receive a concise daily summary of the latest news and analysts' ratings for Lindsay and related companies with MarketBeat.com's FREE daily email newsletter.