Complete the form below to receive the latest headlines and analysts' recommendations for Avis Budget Group with our free daily email newsletter:

Bank of America downgraded shares of Avis Budget Group (NASDAQ:CAR) from a buy rating to a neutral rating in a research note released on Tuesday morning, Price Targets.com reports.

Avis Budget Group (NASDAQ:CAR) last released its quarterly earnings results on Monday, February 15th. The business services provider reported ($0.36) earnings per share for the quarter, beating the Zacks’ consensus estimate of ($0.40) by $0.04. The business had revenue of $1.36 billion during the quarter, compared to analyst estimates of $1.38 billion. Avis Budget Group had a negative net margin of 7.28% and a negative return on equity of 199.17%. Analysts forecast that Avis Budget Group will post -6.29 earnings per share for the current year.

In other news, EVP Edward P. Linnen sold 8,300 shares of Avis Budget Group stock in a transaction that occurred on Friday, March 5th. The shares were sold at an average price of $62.49, for a total value of $518,667.00. Following the transaction, the executive vice president now owns 35,038 shares of the company’s stock, valued at approximately $2,189,524.62. The sale was disclosed in a filing with the Securities & Exchange Commission, which is accessible through the SEC website. Also, CFO Brian J. Choi acquired 23,735 shares of the stock in a transaction dated Friday, February 19th. The stock was acquired at an average cost of $45.88 per share, for a total transaction of $1,088,961.80. Following the purchase, the chief financial officer now directly owns 22,000 shares in the company, valued at $1,009,360. The disclosure for this purchase can be found here. 23.20% of the stock is currently owned by company insiders.

Avis Budget Group, Inc, together with its subsidiaries, provides car and truck rentals, car sharing, and ancillary services to businesses and consumers. It operates the Avis brand, a vehicle rental system that supply rental cars to the premium commercial and leisure segments of the travel industry; the Budget Truck brand, a local and one-way truck rental businesses with a fleet of approximately 20,000 vehicles, which are rented through a network of approximately 515 dealer-operated and 410 company-operated locations that serve the consumer and light commercial sectors in the continental United States; and the Zipcar brand, a car sharing network. 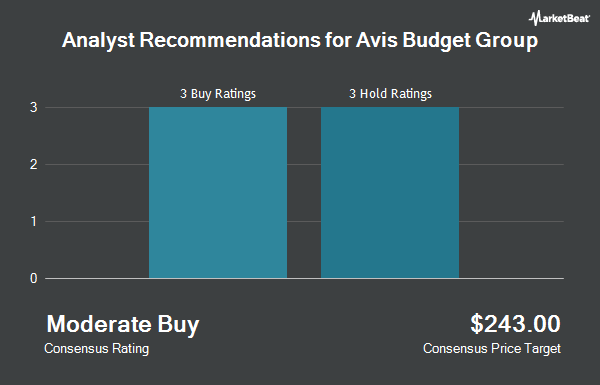