Complete the form below to receive the latest headlines and analysts' recommendations for Kilroy Realty with our free daily email newsletter:

Kilroy Realty (NYSE:KRC) last released its quarterly earnings data on Sunday, January 31st. The real estate investment trust reported $0.67 EPS for the quarter, missing analysts’ consensus estimates of $0.97 by ($0.30). Kilroy Realty had a return on equity of 3.56% and a net margin of 20.35%. On average, research analysts predict that Kilroy Realty will post 3.74 EPS for the current year.

The firm also recently announced a quarterly dividend, which was paid on Wednesday, April 14th. Stockholders of record on Wednesday, March 31st were issued a dividend of $0.50 per share. This represents a $2.00 annualized dividend and a dividend yield of 2.97%. The ex-dividend date was Tuesday, March 30th. Kilroy Realty’s payout ratio is presently 51.15%.

Further Reading: What is a capital gain? 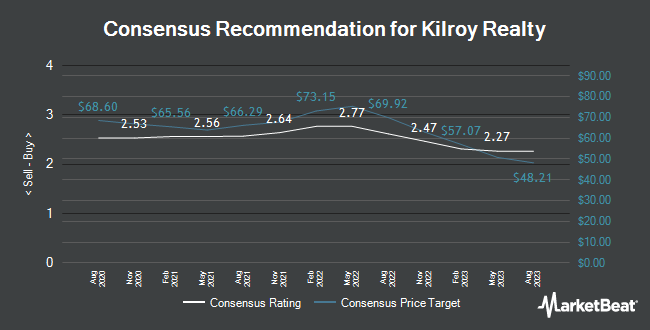