RFG Advisory LLC lessened its holdings in shares of Redfin Co. (NASDAQ:RDFN) by 9.2% during the first quarter, Holdings Channel.com reports. The institutional investor owned 8,611 shares of the company’s stock after selling 875 shares during the quarter. RFG Advisory LLC’s holdings in Redfin were worth $573,000 as of its most recent filing with the Securities & Exchange Commission.

Redfin (NASDAQ:RDFN) last posted its quarterly earnings data on Tuesday, February 23rd. The company reported $0.11 earnings per share for the quarter, beating the Zacks’ consensus estimate of $0.04 by $0.07. The business had revenue of $244.52 million during the quarter, compared to the consensus estimate of $233.11 million. Redfin had a negative return on equity of 11.80% and a negative net margin of 4.61%. Sell-side analysts expect that Redfin Co. will post -0.35 earnings per share for the current fiscal year.

Redfin Corporation operates as a residential real estate brokerage company in the United States and Canada. The company operates an online real estate marketplace and provides real estate services, including assisting individuals in the purchase or sell of home. It also provides title and settlement services; originates and sells mortgages; and buys and sells homes.

Recommended Story: If I purchase shares through a brokerage account, am I the holder of record?

Want to see what other hedge funds are holding RDFN? Visit HoldingsChannel.com to get the latest 13F filings and insider trades for Redfin Co. (NASDAQ:RDFN). 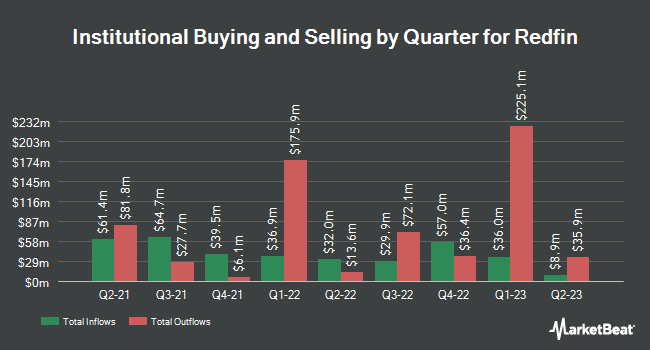 EastGroup Properties, Inc. Given Consensus Recommendation of “Hold” by Analysts