$41.49 Million in Sales Expected for ChannelAdvisor Co. (NYSE:ECOM) This Quarter

Wall Street analysts expect that ChannelAdvisor Co. (NYSE:ECOM) will report sales of $41.49 million for the current quarter, according to Zacks Investment Research. Two analysts have provided estimates for ChannelAdvisor’s earnings, with estimates ranging from $41.38 million to $41.60 million. ChannelAdvisor posted sales of $35.29 million in the same quarter last year, which would indicate a positive year-over-year growth rate of 17.6%. The business is scheduled to announce its next quarterly earnings results on Thursday, November 4th.

According to Zacks, analysts expect that ChannelAdvisor will report full-year sales of $165.66 million for the current fiscal year, with estimates ranging from $165.10 million to $166.23 million. For the next fiscal year, analysts expect that the company will report sales of $180.54 million, with estimates ranging from $178.30 million to $182.77 million. Zacks Investment Research’s sales calculations are a mean average based on a survey of sell-side research firms that that provide coverage for ChannelAdvisor.

ChannelAdvisor (NYSE:ECOM) last announced its quarterly earnings data on Thursday, August 5th. The software maker reported $0.26 earnings per share (EPS) for the quarter, topping analysts’ consensus estimates of $0.09 by $0.17. The firm had revenue of $41.54 million for the quarter, compared to the consensus estimate of $40.04 million. ChannelAdvisor had a net margin of 12.70% and a return on equity of 13.92%. The business’s revenue for the quarter was up 11.0% on a year-over-year basis. During the same period in the prior year, the company posted $0.24 earnings per share.

Separately, Zacks Investment Research cut shares of ChannelAdvisor from a “buy” rating to a “hold” rating in a report on Monday, August 16th.

ChannelAdvisor Corp. provides software as a service solution. It enables the retailer and branded manufacturer customers to integrate, manage and optimize their merchandise sales across hundreds of online channels. Its customers utilize platform to connect with new and existing sources of demand for their products through channels such as Amazon, eBay, Facebook, Google and Walmart. 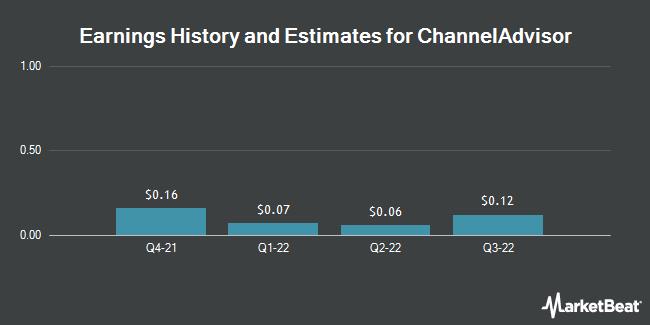 Complete the form below to receive the latest headlines and analysts' recommendations for ChannelAdvisor with our free daily email newsletter: