Separately, Credit Suisse Group raised their price objective on Mr. Cooper Group from $41.00 to $45.00 and gave the company an outperform rating in a research report on Friday, July 30th. Four analysts have rated the stock with a hold rating and five have assigned a buy rating to the company’s stock. According to MarketBeat.com, Mr. Cooper Group has an average rating of Buy and a consensus price target of $38.75.

Mr. Cooper Group (NASDAQ:COOP) last posted its quarterly earnings results on Thursday, July 29th. The company reported $1.92 earnings per share (EPS) for the quarter, topping analysts’ consensus estimates of $1.60 by $0.32. Mr. Cooper Group had a return on equity of 34.60% and a net margin of 38.03%. On average, equities analysts forecast that Mr. Cooper Group will post 8.14 EPS for the current fiscal year.

See Also: The limitations of an equal weight rating

Get a free copy of the Zacks research report on Mr. Cooper Group (COOP) 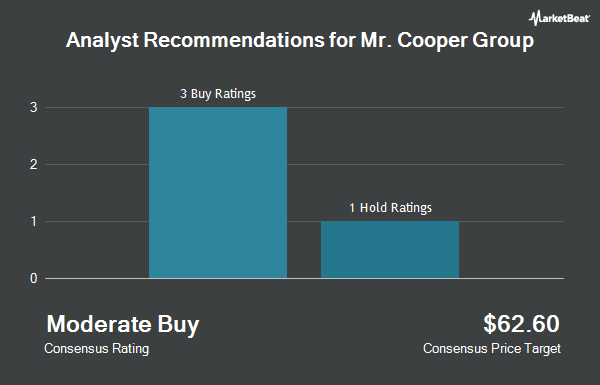 $0.33 Earnings Per Share Expected for Howard Bancorp, Inc. This Quarter

Tidal Finance Price Down 8.4% This Week

Complete the form below to receive the latest headlines and analysts' recommendations for Mr. Cooper Group with our free daily email newsletter: