Equities researchers at KeyCorp began coverage on shares of Franco-Nevada (TSE:FNV) (NYSE:FNV) in a report issued on Thursday, Price Targets.com reports. The brokerage set a “buy” rating and a C$156.00 price target on the stock. KeyCorp’s price objective would suggest a potential downside of 6.22% from the company’s previous close.

Franco-Nevada (TSE:FNV) (NYSE:FNV) last released its quarterly earnings results on Wednesday, August 11th. The company reported C$1.18 earnings per share (EPS) for the quarter, hitting the Thomson Reuters’ consensus estimate of C$1.18. The firm had revenue of C$426.47 million during the quarter, compared to analysts’ expectations of C$451.36 million. Analysts anticipate that Franco-Nevada will post 3.6779035 EPS for the current fiscal year.

Franco-Nevada Corporation operates as a gold-focused royalty and stream company in the United States, Latin America, Canada, Australia, Europe, and Africa, and internationally. It operates through two segment, Mining and Energy. The company manages its portfolio with a focus on precious metals, such as gold, silver, and platinum group metals; and energy comprising oil, gas, and natural gas liquids. 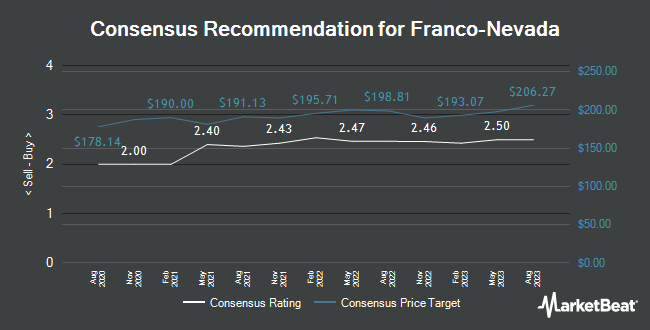 Complete the form below to receive the latest headlines and analysts' recommendations for Franco-Nevada with our free daily email newsletter: