According to Zacks, “Shares of People’s United have underperformed the industry in the past six months. The company has an impressive earnings surprise history, having surpassed the Zacks Consensus Estimate in all of the trailing four quarters. People’s United’s plans to merge with M&T Bank Corporation in an all-stock deal worth $7.6 billion. It has been also expanding via strategic acquisitions, supported by a healthy balance sheet. Gradual rise in loan demand will support net interest margin (NIM) amid the low-interest scenario in the time to come. The company’s solid capital-deployment activities seem sustainable. However, the company’s significant exposure to commercial loans makes us apprehensive. Rising operating expenses due to merger-related costs and higher compensation costs limit People’s United's bottom-line extent.”

Separately, Morgan Stanley cut their price objective on shares of People’s United Financial from $21.00 to $20.50 and set an equal weight rating on the stock in a research report on Monday, August 2nd. Six equities research analysts have rated the stock with a hold rating and one has issued a buy rating to the company. According to MarketBeat.com, People’s United Financial currently has a consensus rating of Hold and a consensus target price of $16.79.

People’s United Financial (NASDAQ:PBCT) last issued its quarterly earnings data on Wednesday, July 14th. The bank reported $0.41 earnings per share (EPS) for the quarter, topping analysts’ consensus estimates of $0.35 by $0.06. People’s United Financial had a net margin of 30.99% and a return on equity of 8.53%. The firm had revenue of $551.70 million for the quarter, compared to the consensus estimate of $497.60 million. During the same quarter in the previous year, the firm earned $0.24 EPS. The company’s quarterly revenue was up 11.3% compared to the same quarter last year. As a group, equities research analysts forecast that People’s United Financial will post 1.4 EPS for the current fiscal year.

The business also recently announced a quarterly dividend, which was paid on Sunday, August 15th. Investors of record on Sunday, August 1st were paid a $0.183 dividend. This represents a $0.73 dividend on an annualized basis and a yield of 4.38%. The ex-dividend date was Thursday, July 29th. People’s United Financial’s dividend payout ratio (DPR) is presently 57.48%.

See Also: What is a resistance level? 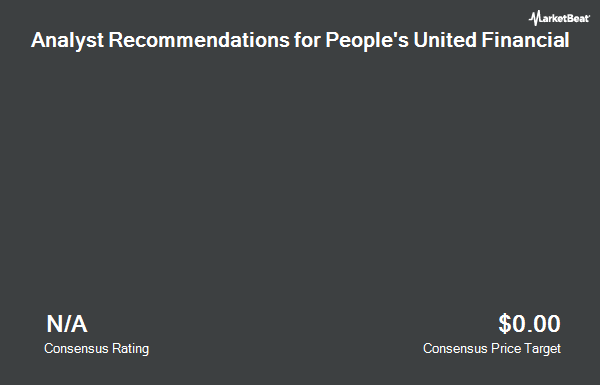 PRCY Coin Price Down 0.1% This Week

NEXT Price Tops $0.14 on Top Exchanges

Complete the form below to receive the latest headlines and analysts' recommendations for People's United Financial with our free daily email newsletter: