Principal Financial Group Inc. decreased its position in Ardelyx, Inc. (NASDAQ:ARDX) by 67.0% in the second quarter, Holdings Channel reports. The firm owned 33,453 shares of the biopharmaceutical company’s stock after selling 67,998 shares during the period. Principal Financial Group Inc.’s holdings in Ardelyx were worth $254,000 at the end of the most recent quarter.

Ardelyx (NASDAQ:ARDX) last released its earnings results on Thursday, August 12th. The biopharmaceutical company reported ($0.45) earnings per share (EPS) for the quarter, missing the consensus estimate of ($0.36) by ($0.09). Ardelyx had a negative net margin of 1,009.33% and a negative return on equity of 99.11%. The firm had revenue of $1.31 million during the quarter, compared to analyst estimates of $1.10 million. Research analysts expect that Ardelyx, Inc. will post -1.38 earnings per share for the current year.

Ardelyx, Inc is a biopharmaceutical company, which engages in the research, development and commercialization of medicine for the treatment of cardiorenal diseases. Its product portfolio includes tenapanor, which is an experimental medication that works exclusively in the gut and is in late-stage clinical development.

Further Reading: What is a good dividend yield?

Want to see what other hedge funds are holding ARDX? Visit HoldingsChannel.com to get the latest 13F filings and insider trades for Ardelyx, Inc. (NASDAQ:ARDX). 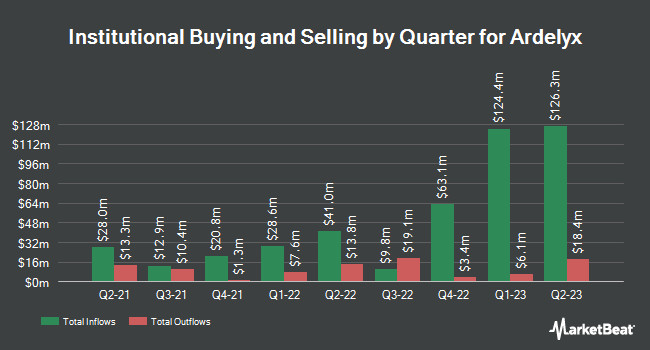 Receive News & Ratings for Ardelyx Daily - Enter your email address below to receive a concise daily summary of the latest news and analysts' ratings for Ardelyx and related companies with MarketBeat.com's FREE daily email newsletter.

Cantaloupe, Inc. Expected to Announce Earnings of -$0.03 Per Share

$699.44 Million in Sales Expected for Teleflex Incorporated This Quarter

Complete the form below to receive the latest headlines and analysts' recommendations for Ardelyx with our free daily email newsletter: