Toroso Investments LLC lessened its position in Upwork Inc. (NASDAQ:UPWK) by 9.9% during the 2nd quarter, according to the company in its most recent disclosure with the Securities and Exchange Commission (SEC). The institutional investor owned 25,065 shares of the company’s stock after selling 2,762 shares during the quarter. Toroso Investments LLC’s holdings in Upwork were worth $1,461,000 as of its most recent SEC filing.

Upwork (NASDAQ:UPWK) last released its earnings results on Thursday, July 29th. The company reported ($0.13) EPS for the quarter, missing the Thomson Reuters’ consensus estimate of ($0.11) by ($0.02). Upwork had a negative return on equity of 8.77% and a negative net margin of 5.94%. The company had revenue of $124.18 million for the quarter, compared to analyst estimates of $120.82 million. As a group, analysts expect that Upwork Inc. will post -0.42 EPS for the current year.

Upwork, Inc operates an online marketplace that enables businesses to find, hire, and pay freelancers for short-term and longer-term projects. Its marketplace offerings include Upwork Basic, Upwork Plus, Upwork Business, Upwork Enterprise, and Upwork Payroll. The company was founded by Odysseas Tsatalos and Efstratios Karamanlakis in December 2013 and is headquartered in San Francisco, CA.

Want to see what other hedge funds are holding UPWK? Visit HoldingsChannel.com to get the latest 13F filings and insider trades for Upwork Inc. (NASDAQ:UPWK). 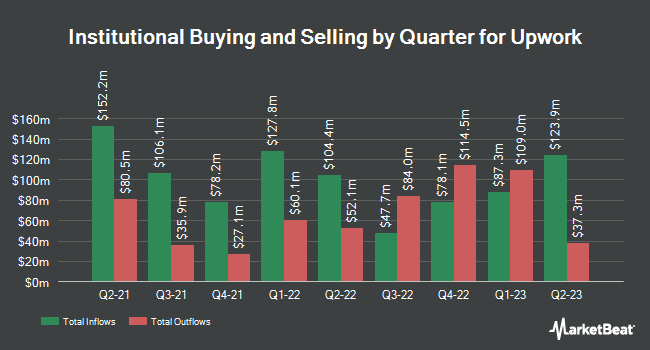 Receive News & Ratings for Upwork Daily - Enter your email address below to receive a concise daily summary of the latest news and analysts' ratings for Upwork and related companies with MarketBeat.com's FREE daily email newsletter.

Complete the form below to receive the latest headlines and analysts' recommendations for Upwork with our free daily email newsletter: