Zalando (OTCMKTS:ZLNDY) Downgraded to “Underperform” at Bank of America

Zalando (OTCMKTS:ZLNDY) was downgraded by equities research analysts at Bank of America from a “neutral” rating to an “underperform” rating in a report released on Thursday, The Fly reports.

Zalando (OTCMKTS:ZLNDY) last issued its quarterly earnings data on Thursday, August 5th. The company reported $0.27 earnings per share (EPS) for the quarter. The business had revenue of $3.29 billion for the quarter. Zalando had a return on equity of 16.15% and a net margin of 3.67%. On average, research analysts forecast that Zalando will post 0.55 earnings per share for the current fiscal year.

Zalando SE engages in the provision of online fashion and lifestyle platform. It offers shoes, apparel, accessories, and beauty products. It operates through the following segments: Fashion Store, Offspring, and All Other Segments. The Fashion Store segment focuses on its main sales channels. The Offspring segment includes the sales channels Zelando Lounge, outlet stores, and overstock management. 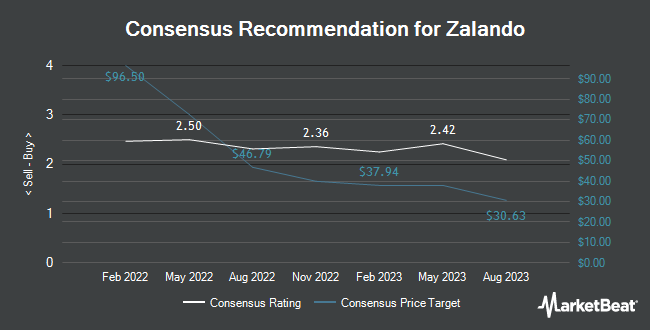 Receive News & Ratings for Zalando Daily - Enter your email address below to receive a concise daily summary of the latest news and analysts' ratings for Zalando and related companies with MarketBeat.com's FREE daily email newsletter.

$1.58 Earnings Per Share Expected for NICE Ltd. This Quarter

Complete the form below to receive the latest headlines and analysts' recommendations for Zalando with our free daily email newsletter: