Equities research analysts predict that Helios Technologies, Inc. (NASDAQ:HLIO) will report sales of $204.75 million for the current fiscal quarter, Zacks Investment Research reports. Two analysts have issued estimates for Helios Technologies’ earnings, with the lowest sales estimate coming in at $201.10 million and the highest estimate coming in at $208.40 million. Helios Technologies reported sales of $151.62 million in the same quarter last year, which would suggest a positive year over year growth rate of 35%. The company is expected to issue its next quarterly earnings results on Monday, March 7th.

According to Zacks, analysts expect that Helios Technologies will report full year sales of $854.25 million for the current year, with estimates ranging from $850.25 million to $859.90 million. For the next financial year, analysts forecast that the firm will report sales of $914.74 million, with estimates ranging from $902.60 million to $933.90 million. Zacks Investment Research’s sales calculations are a mean average based on a survey of research analysts that cover Helios Technologies.

Helios Technologies (NASDAQ:HLIO) last announced its earnings results on Monday, November 8th. The company reported $1.07 EPS for the quarter, beating analysts’ consensus estimates of $0.80 by $0.27. Helios Technologies had a net margin of 10.78% and a return on equity of 19.28%. The business had revenue of $223.20 million during the quarter, compared to analysts’ expectations of $195.93 million. During the same period in the prior year, the company earned $0.53 earnings per share. The business’s revenue was up 82.1% compared to the same quarter last year.

The business also recently announced a quarterly dividend, which was paid on Wednesday, October 20th. Shareholders of record on Tuesday, October 5th were given a dividend of $0.09 per share. The ex-dividend date of this dividend was Monday, October 4th. This represents a $0.36 annualized dividend and a yield of 0.33%. Helios Technologies’s payout ratio is currently 13.43%.

Helios Technologies, Inc engages in the development and manufacture of motion control and electronic controls technology for diverse end markets, including construction, material handling, agriculture, energy, recreational vehicles, marine, health and wellness. It operates through the Hydraulics and Electronics segments.

See Also: Dual Listing What You Need to Know 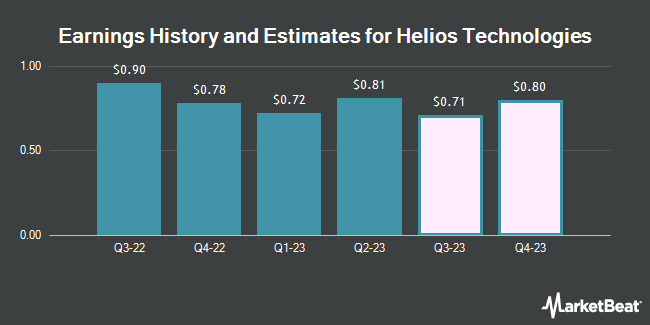 Complete the form below to receive the latest headlines and analysts' recommendations for Helios Technologies with our free daily email newsletter: