Victory Capital Management Inc. grew its holdings in shares of Heartland Express, Inc. (NASDAQ:HTLD) by 7.2% during the third quarter, according to the company in its most recent filing with the Securities & Exchange Commission. The institutional investor owned 38,875 shares of the transportation company’s stock after purchasing an additional 2,605 shares during the period. Victory Capital Management Inc.’s holdings in Heartland Express were worth $623,000 at the end of the most recent quarter.

Heartland Express (NASDAQ:HTLD) last issued its quarterly earnings data on Thursday, October 14th. The transportation company reported $0.31 EPS for the quarter, beating the Thomson Reuters’ consensus estimate of $0.30 by $0.01. The business had revenue of $152.60 million during the quarter, compared to the consensus estimate of $159.41 million. Heartland Express had a net margin of 12.46% and a return on equity of 10.58%. The firm’s revenue was down 6.0% compared to the same quarter last year. During the same quarter in the prior year, the firm earned $0.25 EPS. As a group, equities analysts predict that Heartland Express, Inc. will post 0.99 earnings per share for the current fiscal year.

The business also recently disclosed a quarterly dividend, which was paid on Friday, December 17th. Investors of record on Tuesday, December 7th were paid a $0.02 dividend. This represents a $0.08 annualized dividend and a yield of 0.50%. The ex-dividend date of this dividend was Monday, December 6th. Heartland Express’s payout ratio is 8.33%.

Heartland Express, Inc is a holding company, which engages in the provision of short-to-medium haul truckload carrier services. It offers long haul truckload and regional truckload transportation. The company was founded by Russell A. Gerdin in 1978 and is headquartered in North Liberty, IA. 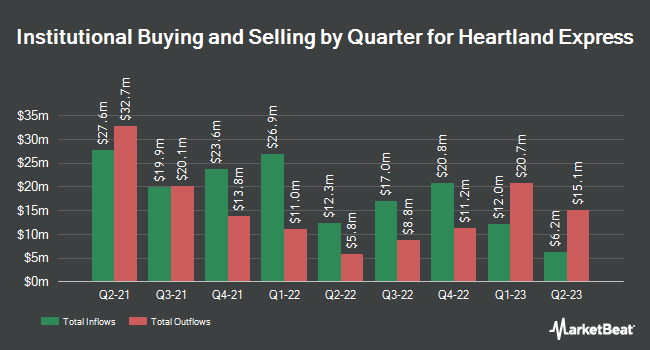 United Internet AG Given Average Rating of “Buy” by Brokerages

Complete the form below to receive the latest headlines and analysts' recommendations for Heartland Express with our free daily email newsletter: