Analysts expect ONE Gas, Inc. (NYSE:OGS – Get Rating) to post $349.50 million in sales for the current quarter, Zacks Investment Research reports. Two analysts have provided estimates for ONE Gas’ earnings. The lowest sales estimate is $331.09 million and the highest is $367.91 million. ONE Gas posted sales of $315.65 million in the same quarter last year, which suggests a positive year-over-year growth rate of 10.7%. The business is expected to announce its next earnings report on Monday, January 1st.

On average, analysts expect that ONE Gas will report full year sales of $2.10 billion for the current year, with estimates ranging from $1.88 billion to $2.31 billion. For the next fiscal year, analysts forecast that the company will post sales of $2.18 billion, with estimates ranging from $1.96 billion to $2.39 billion. Zacks Investment Research’s sales calculations are an average based on a survey of sell-side research analysts that cover ONE Gas.

ONE Gas (NYSE:OGS – Get Rating) last posted its quarterly earnings data on Wednesday, February 23rd. The utilities provider reported $1.12 EPS for the quarter, hitting analysts’ consensus estimates of $1.12. ONE Gas had a return on equity of 8.90% and a net margin of 9.74%. The firm had revenue of $593.74 million during the quarter, compared to analysts’ expectations of $499.74 million. During the same quarter last year, the business posted $1.09 EPS. The firm’s quarterly revenue was up 22.6% compared to the same quarter last year.

In other news, Director Michael G. Hutchinson sold 750 shares of ONE Gas stock in a transaction dated Friday, March 11th. The stock was sold at an average price of $86.12, for a total value of $64,590.00. The transaction was disclosed in a document filed with the SEC, which is available through this link. Insiders own 1.38% of the company’s stock.

The company also recently disclosed a quarterly dividend, which will be paid on Wednesday, June 1st. Stockholders of record on Monday, May 16th will be paid a $0.62 dividend. This represents a $2.48 annualized dividend and a dividend yield of 2.92%. The ex-dividend date of this dividend is Friday, May 13th. ONE Gas’s dividend payout ratio is currently 63.75%.

About ONE Gas (Get Rating) 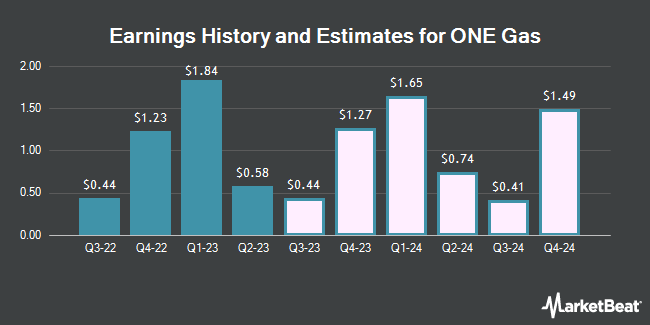 Receive News & Ratings for ONE Gas Daily - Enter your email address below to receive a concise daily summary of the latest news and analysts' ratings for ONE Gas and related companies with MarketBeat.com's FREE daily email newsletter.

$243.91 Million in Sales Expected for Bloom Energy Co. This Quarter

Daily Ratings & News for ONE Gas

Complete the form below to receive the latest headlines and analysts' recommendations for ONE Gas with our free daily email newsletter: