Equities research analysts predict that Theravance Biopharma, Inc. (NASDAQ:TBPH – Get Rating) will announce $16.39 million in sales for the current quarter, Zacks Investment Research reports. Two analysts have issued estimates for Theravance Biopharma’s earnings, with the lowest sales estimate coming in at $14.88 million and the highest estimate coming in at $17.90 million. Theravance Biopharma posted sales of $12.91 million during the same quarter last year, which would suggest a positive year-over-year growth rate of 27%. The firm is expected to issue its next earnings results on Monday, January 1st.

According to Zacks, analysts expect that Theravance Biopharma will report full year sales of $98.45 million for the current financial year, with estimates ranging from $92.11 million to $104.79 million. For the next year, analysts anticipate that the firm will post sales of $87.33 million, with estimates ranging from $68.56 million to $123.15 million. Zacks’ sales calculations are a mean average based on a survey of research firms that follow Theravance Biopharma.

Theravance Biopharma (NASDAQ:TBPH – Get Rating) last issued its quarterly earnings results on Wednesday, February 23rd. The biopharmaceutical company reported ($0.43) earnings per share (EPS) for the quarter, missing the consensus estimate of ($0.30) by ($0.13). The firm had revenue of $14.95 million for the quarter, compared to analyst estimates of $15.59 million. During the same quarter in the previous year, the company earned ($0.92) earnings per share.

Theravance Biopharma, Inc is a diversified biopharmaceutical company primarily focused on the discovery, development and commercialization of organ-selective medicines. Its purpose is to pioneer a new generation of small molecule drugs designed to better meet patient needs. Its research is focused in the areas of inflammation and immunology.
In pursuit of its purpose, Theravance Biopharma applies insights and innovation at each stage of its business and utilizes its internal capabilities and those of partners around the world. 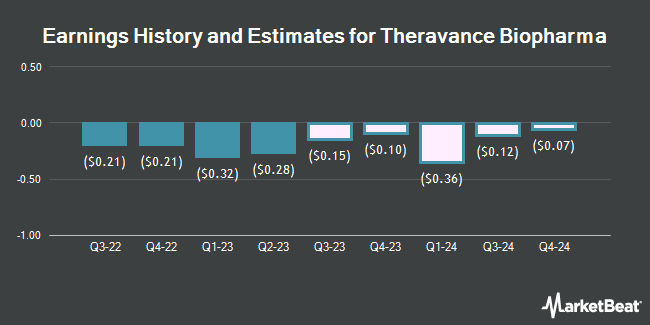 $4.99 Billion in Sales Expected for The Charles Schwab Co. This Quarter

Complete the form below to receive the latest headlines and analysts' recommendations for Theravance Biopharma with our free daily email newsletter: