Deciphera Pharmaceuticals (NASDAQ:DCPH – Get Rating) had its price target upped by HC Wainwright from $15.00 to $20.00 in a research note issued to investors on Friday, The Fly reports. HC Wainwright currently has a buy rating on the stock.

Separately, JMP Securities raised shares of Deciphera Pharmaceuticals from a market perform rating to an outperform rating and set a $23.00 price target on the stock in a research report on Friday. Two investment analysts have rated the stock with a sell rating, five have issued a hold rating and three have issued a buy rating to the stock. According to data from MarketBeat, the stock has an average rating of Hold and a consensus target price of $14.13.

Deciphera Pharmaceuticals, Inc, a biopharmaceutical company, develops drugs to enhance the lives of cancer patients by addressing key mechanisms of drug resistance that limit the rate and durability of response to existing cancer therapies in the United States and internationally. Its lead drug candidate is QINLOCK used for the treatment of gastrointestinal stromal tumors (GIST), as well as in INTRIGUE Phase 3 study to treat second-line GIST. 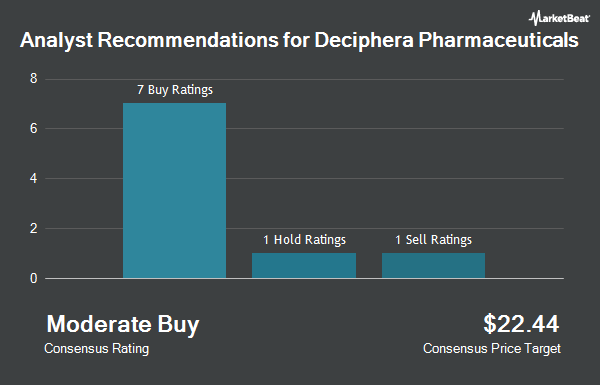 Complete the form below to receive the latest headlines and analysts' recommendations for Deciphera Pharmaceuticals with our free daily email newsletter: