Shares of Fifth Third Bancorp (NASDAQ:FITB – Get Rating) have been given a consensus rating of “Moderate Buy” by the sixteen ratings firms that are covering the stock, MarketBeat Ratings reports. Four research analysts have rated the stock with a hold recommendation and seven have issued a buy recommendation on the company. The average 12-month price objective among analysts that have covered the stock in the last year is $40.57.

In related news, EVP Robert P. Shaffer sold 10,209 shares of the business’s stock in a transaction dated Thursday, October 27th. The stock was sold at an average price of $35.76, for a total value of $365,073.84. Following the transaction, the executive vice president now owns 69,534 shares in the company, valued at approximately $2,486,535.84. The sale was disclosed in a legal filing with the Securities & Exchange Commission, which is accessible through this hyperlink. 0.67% of the stock is currently owned by insiders.

Fifth Third Bancorp (NASDAQ:FITB – Get Rating) last announced its quarterly earnings results on Thursday, January 19th. The financial services provider reported $1.01 earnings per share (EPS) for the quarter, topping analysts’ consensus estimates of $0.99 by $0.02. The company had revenue of $2.31 billion during the quarter, compared to the consensus estimate of $2.34 billion. Fifth Third Bancorp had a return on equity of 15.48% and a net margin of 26.15%. During the same period in the previous year, the business earned $0.90 EPS. Sell-side analysts expect that Fifth Third Bancorp will post 3.79 earnings per share for the current fiscal year.

The business also recently declared a quarterly dividend, which was paid on Tuesday, January 17th. Investors of record on Friday, December 30th were given a $0.33 dividend. This represents a $1.32 annualized dividend and a yield of 3.76%. The ex-dividend date of this dividend was Thursday, December 29th. Fifth Third Bancorp’s dividend payout ratio (DPR) is presently 39.29%.

Fifth Third is a bank that's as long on innovation as it is on history. Since 1858, we've been helping individuals, families, businesses and communities grow through smart financial services that improve lives. Our list of firsts is extensive, and it's one that continues to expand as we explore the intersection of tech-driven innovation, dedicated people, and focused community impact. 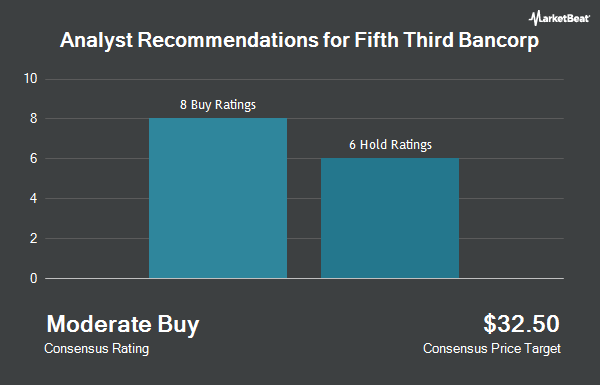 Beldex Price Down 5.5% Over Last Week

Decred Price Up 7.1% This Week

Complete the form below to receive the latest headlines and analysts' recommendations for Fifth Third Bancorp with our free daily email newsletter: