Fisker (NYSE:FSR – Get Rating) was downgraded by investment analysts at Morgan Stanley from an “equal weight” rating to an “underweight” rating in a research report issued on Wednesday, The Fly reports.

Fisker (NYSE:FSR – Get Rating) last announced its quarterly earnings results on Wednesday, November 2nd. The company reported ($0.47) earnings per share (EPS) for the quarter, missing the consensus estimate of ($0.43) by ($0.04). Fisker had a negative net margin of 669,901.25% and a negative return on equity of 75.88%. The company had revenue of $0.01 million during the quarter. On average, equities research analysts forecast that Fisker will post -1.64 earnings per share for the current year.

In other news, CEO Henrik Fisker purchased 33,700 shares of the firm’s stock in a transaction that occurred on Monday, December 5th. The stock was acquired at an average cost of $7.42 per share, for a total transaction of $250,054.00. Following the completion of the purchase, the chief executive officer now owns 629,218 shares of the company’s stock, valued at $4,668,797.56. The purchase was disclosed in a document filed with the SEC, which can be accessed through this hyperlink. Over the last three months, insiders bought 35,505 shares of company stock worth $263,208. Corporate insiders own 45.75% of the company’s stock.

Hedge Funds Weigh In On Fisker

Fisker Inc develops, manufactures, markets, leases, or sale of electric vehicles. The company is also involved in asset-light automotive business. It operates through The White Space, The Value Segment, and The Conservative Premium segments. In addition, the company offers fisker flexible platform agnostic design ,a process that develops and designs electric vehicles in specific segment size. 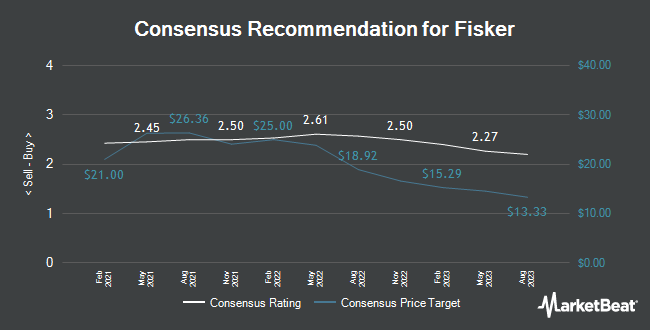 Receive News & Ratings for Fisker Daily - Enter your email address below to receive a concise daily summary of the latest news and analysts' ratings for Fisker and related companies with MarketBeat.com's FREE daily email newsletter.

Lantronix Cut to “Sell” at StockNews.com

Complete the form below to receive the latest headlines and analysts' recommendations for Fisker with our free daily email newsletter: