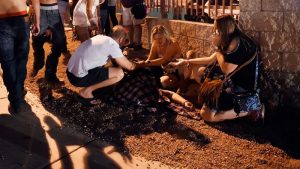 Authorities said a sole gunman turned a concert in Las Vegas into a shooting range on Sunday night killing 50 people while injuring over 200 others in what is now the deadliest mass shooting in the modern history of the U.S.

The suspect was shot and killed by police on the 32nd floor of the Mandalay Bay Hotel. He has been identified as Stephen Paddock, a 64-year old resident of Mesquite, Nevada.

Authorities said they were also confident that Marilou Danley, Paddock’s roommate was located, after previously saying they had called Danley a person of interest.

Officials would not comment on what they believe was the Paddock’s motive.

Authorities said an on-duty police officer was critically wounded and another was shot but not seriously wounded. Two off-duty officers who were in attendance at the concert were killed.

The gunman shot from the hotel’s 32nd floor using automatic weapons until police were able to shot and kill him. The first calls received by police of an ongoing shooting were at 10:08 p.m. local time.

The Route 91 Harvest Festival was taking place and at the time of the shooting Jason Aldean was performing. Aldean was singing his last song, when the shooting began and initially people in attendance thought the shots being fired were firecrackers, but as they continued Aldean stopped singing and members of the audience started to yell for people to get down on the ground.

One concert goer said he heard hundreds of shots, calling the gunfire rapid. He believes it was a machine gun and possibly more than just one.

Authorities said that law enforcement swarmed into the hotel and shot the gunman inside a 32nd-floor room. Responding officers said they used an explosive device that forced the door open and then shot Paddock.

Some people at the concert remained on the scene to help those that had been shot. One concertgoer said he stopped to help anyone he could see was breathing.

When the 40,000 fans attending the concert, started fleeing for safety, some concert goers said they could see flashes of light high above in the hotel tower.

A spokesperson for the FBI said that the shooting was well-planned as it was a major open-air concert and the room was obtained directly facing the location of the event.

The FBI spokesperson said that the subject likely was helped, which would make that person, who police believe was his roommate, an accomplice.