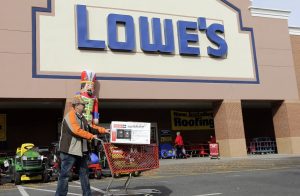 Lowe’s posted sales and earnings for the third quarter that beat the Street, as more consumers arrived at stores for emergency supplies prior to and repairs following the devastating wildfires and hurricanes.

Shares of the home improvement retailer were climbing over 1.5% in trading before Tuesday’s opening bell after the company posted its quarterly results.

Lowe’s posted earnings per share of $1.05, excluding certain items, in comparison to profit forecast on Wall Street of $1.02 a share.

Sales at same-stores moved higher by 5.7% in comparison with Wall Street expectations of an increase of 4.6%.

Total sales for the home improvement retailer were up 6.5% to over $16.8 billion compared to last year for the same period of $15.7 billion. Sales related to hurricanes totaled over $200 million during the third quarter, officials at Lowe’s announced.

Sales at stores open a minimum of 13 months were up 5.7% beating expectations handily.

For the full year, Lowe’s is expecting revenue to move higher by 5%, with sales at established stores increasing 3.5%. Lowe’s is on track as well to have added approximately 25 new hardware and home improvement stores prior to the end of the year.

One analyst said the only negative about Lowe’s quarterly numbers was that Home Depot, its biggest rival, posted growth in same store sales that was even higher at 7.9%.

In addition, Lowe’s announced on Tuesday that COO Rick Damron would retire and Richard Maltsbarger, president of the international business for the company would take his place effective on February 3.

Maltsbarger, in the new role will lead a push by Lowe’s into creating more customer omni-channel experiences.

Attempting to attract younger shoppers, Lowe’s has experimented with technology and opened smart home centers in some locations prior to the holidays.

Earlier in 2017, Lowe’s launched a virtual reality experience offering assistance through tutorials for do it yourselfers inside Lowe’s Holoroom.

In September, the company launched another two augmented reality apps of which one was for measuring objects or distance within the camera view of a phone, and one was to view images of furnishing to scale within the own home of the user.