Saudi Arabia to Issue Tourist Visas for First Time in 2018 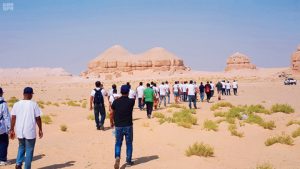 It is likely that Saudi Arabia does not appear on the vacation list of most travelers, but its government is attempting to change that.

The Gulf Coast kingdom already welcomes Muslim pilgrims in the millions who visit Mecca annually, and it has now geared up to attract the conventional tourist.

Prince Sultan bin Salman, who is head of the Saudi tourism and national heritage commission, said the kingdom was targeting people who want to experience the country and all the grandness it has.

Saudi Arabia is planning to issue its first tourist visas next year, said the prince. Visas previously were restricted to people who were traveling to work or visit holy sites.

However, attracting tourists has become one of the country’s central planks to lower its reliance on just oil. It is aiming to reach 30 million visitors per year by 2030, which would be up from a 2016 count of 18 million. Saudi officials hope annual spending by tourists reaches $47 million by 2020.

Because of that, several projects have been named the last couple of months.

Saudi officials are planning to build new resorts on 100 miles of the sandy coastline along the Red Sea and open by 2022 a Six Flags theme park.

The initiative for the Red Sea received the attention of Richard Branson the billionaire owner of Virgin Air while he was touring Saudi Arabia that including a trip to Madain Saleh the ancient tombs that are a UNESCO World Heritage Site.

The driving force behind the economic overhaul is Crown Prince Mohammed bin Salman and he has unveiled as well plans to build a $500 billion metropolis, which will extend across the borders of Saudi Arabia into Jordan and Egypt.

Saudi Arabia has tremendous potential to be a tourist destination due to favorable temperature, cultural and historical heritage, rich marine life and natural beauty, said a tourist official.

However, some worry about the kingdom being surrounded by countries that are politically unstable where security has been and continues to be an issue.

The security situation in Saudi Arabia is the biggest challenge to its push for tourism and that was highlighted earlier this week when the U.S. State Department issued its new travel warning for the country.

The travel warning told Americans to consider all risk carefully when traveling to Saudi Arabia due to threats from different tourists groups like ISIS and the missile attacks on civilian targets by Yemeni rebels.