The pet industry in China is booming. 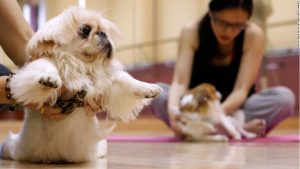 With an increase in the size of the middle class, a big move to urbanization and other changes in demographics such as increasing numbers of elderly, as well as people marrying and raising families later than previously, have turned China into a society of pet owners as well as one that is prepared to spend money lavishly on them.

Shoppers in China are expected to spend more than 46.3 billion yuan equal to $7 billion on pets by 2022, which is up from this year’s 17.5 billion yuan as the pet market swells by close to 20% annually.

The market in the U.S. might still be far bigger with at what is estimated to by $44.4 billion in annual sales for 2017 but is only growing at a rate of 2% annually.

The surge in demand across China is not just great news for the pet food giants around the world, like Nestle SA and Mars Inc., but also for the quickly growing pet food as well as product companies based in China, and entrepreneurs that are starting everything from fancy hotels for pets to dog salons.

The shift in China has been nothing short of amazing, as pet ownership was at one time banned for being considered bourgeois under Mao Zedong the revolutionary leader and despite protests of an annual dog-meat festival is held in Yulin a Chinese town in the south.

Huge potential for this market exists said the owner of one company during an event just recently held in Beijing. The owner noted that younger people, in particular, were forming closer bonds to pets.

Analysts say the money that is being spent is done so willing since pets are looked at now as being part of the family.

The increasing popularity of pets is helping to turn China into a big magnet for local as well as global companies. One investment officer with a fund manager based in Hong Kong said that the pet market in China was a personal pick for him in 2018 as the Chinese look to shift to buying more premium products.

Pingyang has huge ambitions in the pet economy of China. The county located close to Wenzhou, a wealthy city, and with a population of more than one million, is amongst several places that are responding to the call by Beijing to create specialty towns before 2020 in industries from chocolate to cloud computing. In the case of Pingyang, it is all about pets.