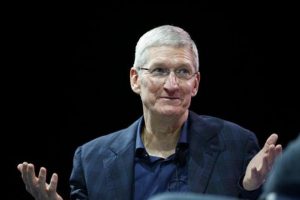 The board of directors of Apple Inc. has told their CEO Tim Cook that he must fly a private jet when traveling, whether it is for work or pleasure.

The new policy was first implemented recently in the interest of efficiency and security based upon the company’s global profile and the very visible nature of Cook’s role as the CEO, says a new proxy statement for Apple shareholders released Wednesday.

The statement continues by saying that any time an Apple private jet is used by Cook for personal travel, costs are to be considered as extra compensation, on which the CEO would need to pay the appropriate taxes.

Apple says Cook accumulated over $93,000 in travel costs it called personal for the company, based on the hourly charges for flying and other costs incurred for such use by Apple including departure taxes, landing fees and fuel charges.

In addition, Apple expensed over $224,000 for incremental private costs for security for the CEO, says the proxy statement, including the hiring of personnel for the specific benefit of Cook. In all, Cook in 2017 made at Apple $12,825,065, which included a contribution of $16,200 to Cooks retirement account by the company.

Other executives at Apple are allowed to use private jets if required, but if a spouse of other member of the family accompanies them, Apple said the executives must pay toward those incremental costs brought on by the additional family member.

Private air travel has become very expensive and to a point that even the wealthiest of businesspeople do not always use it. Warren Buffett named his private aircraft The Indefensible when finally giving into the convenience and the luxury they bring.

Cook has little to say about the situation if the board tells him he must use the private jet.

Cook’s predecessor, the founder of Apple Steve Jobs had his own private jet that was gifted to him during 2000 by Apple. That took place only a few years after he returned to Apple in 1996, as a present to say thank you for turning the flagging fortunes around at the company.

After the passing of Jobs, Apple’s Jony Ive, its design chief, purchased the jet, with Ive saying he did not have to have anything redesigned.