Budweiser Falls Out of Top Three Favorite Beers in U.S. 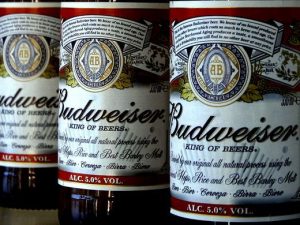 Budweiser is not amongst the three most popular brews in the U.S. any longer. Prior to 2001, Budweiser was the No. 1 selling U.S. beer, but relinquished its crown to Bud Light. In 2011, Budweiser was knocked down from second to third by Coors Light.

Now third place has been taken over by Miller Lite, relegating the once king of beers to fourth spot, according to estimates for sales from Beer Marketer’s Insight, a trade publication, which has maintained a track record of beer sales dating back to the mid-1970s.

Although Miller Lite is part of the nation’s top three, sales in 2017 dipped, but did not drop as much as Bud’s did. In fact, all four of the top selling U.S. beers saw sales fall in 2017.

The shipping volume of Bud Light from the U.S. was down 2 million barrels compared to 2016, the largest annual drop that the trade publication has ever recorded. Shipments of Miller Lite were down 375,000 barrels.

Corona Extra kept its spot in fifth. Michelob Ultra as well as Modelo Especial each leapfrogged Natural Light to become sixth and seventh on the list.

Beer sales overall were down just slightly across the U.S. in 2017.

The increase in popularity of craft beers, the changing tastes of drinkers, and a booming spirits and wine industry have pressured brewers worldwide like Anheuser-Busch InBev makers of Budweiser, Bud Light, Natural Light, Busch and Michelob Ultra, and Molson Coors the maker of Miller Lite and Coors Light.

Larger brewers have been suffering as consumers have been hit by the flavor bug, said a trade industry specialist.

Ten years ago, brands in the top 10 represented close to 66% of the entire beer industry. That share shrank to a current 50% as popularity of craft beers increased, said a trade publication.

However, signs have popped up that craft beers have started to slowdown in sales as well.

Pabst expanded much too quickly resulting in job cuts during 2017. Summit Brewing, Magic Hat, North American beverage and Green Flash did as well as shipment volume has fallen by 14% the last five years.

The largest independent brewer in New Hampshire Smuttynose will be auctioned off.

Boston Beer Co. and Sierra Nevada, the largest two craft breweries have had shipments fall. Six out of the top seven craft beer brands’ experienced a drop in sales during 2017.