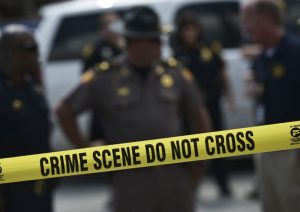 Authorities said one police officer lost his life and two deputies survived but were seriously wounded on Friday during a shootout that killed the suspect in Locust Grove, south of Atlanta, Georgia.

The shooting took place inside a residence, said a local sheriff during a news conference Friday afternoon.

He explained that gunfire erupted as deputies attempted to take into custody a male suspect on an arrest warrant from the court. Authorities did not say who had fired first and did not release further details about what took place.

The Georgia Bureau of Investigation (GBI) said the names of officers involved in the shooting were: Chase Maddox, an officer with the Locust Grove Police Department who lost his life and Deputies Ralph Callaway and Michael Corley from the Henry County Sheriff’s Department, Both were seriously wounded.

The sheriff said that the two law enforcement officers spoke with the individual and following 10 minutes of discussion decided to make an arrest. At that point it was determined they would have issued trying to place him in custody so a Locust Grove officer was called for backup.

The sheriff said there had been no reason to think that the suspect would be violent, but while trying to make the arrest an altercation broke out.

The two deputies from Henry Counties were veterans. One has served 20 years on the force. The officer from Locust Grove, who died, had been with the force for five years.

One deputy was hospitalized in serious condition and was in surgery Friday afternoon. He was hit below his bulletproof vest. The other deputy was listed in fair condition after being hit with a bullet in his vest.

The GBI will carry out a full investigation and a spokesperson from the GBI said that the relatives of the suspect were being notified and when that was completed his name would be released.

Police blocked multiple entrances to the subdivision where the shooting took place and turned people away who did not live in the development. Authorities also put a nearby elementary school on lockdown after learning of the incident.

Authorities did not given any indication when they would release any further information about what took place inside the home when officers attempted to put the man in custody.