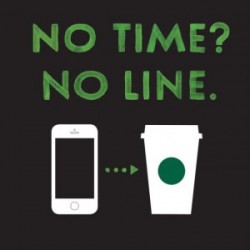 Starbucks is trying to get more people to use the company’s time-saving mobile app for ordering that allows customers to purchase drinks without needing to wait in line.

Interviews held with over 25 customers of Starbucks suggest that the move, which was aimed at countering the increased competition from the fast food chains as well as other coffee vendors, might face obstacles.

To begin with, saving time was not something high on the wish lists for some customers, as several indicated they deliberately slow down visits at Starbucks to chit-chat with the baristas who take the orders and make the lattes.

Those types of comments highlight the cultural conundrum of Starbucks of how can the company meets demands of time-crunched, tech-savvy customers along with growth hungry investors without becoming a fast-food chain.

One business consultant said that he did not mind standing and waiting in line as he liked to speak with baristas. He has used the mobile app since it became available nationally almost three years ago, but only about once every two weeks.
Kevin Johnson the Starbucks CEO since April when he took over for co-founder Howard Schultz will lay out company strategy for balancing the “customer connection” it has with need for more speed, on Wednesday at the company’s annual meeting held in Seattle.

Shortly after it launched the service, Starbucks had several bottlenecks at different locations where baristas could not prepare for the huge crush of mobile ordering.
Baristas worked through those issues, and before the end of 2017 mobile orders represented 11% of the U.S. transactions at Starbucks.

Now, Starbucks wants to offer ordering on mobile previously available to just members of the company loyalty programs, to all its customers.

These types of services might be helpful to companies in saving money by automating certain tasks. However, some customers said they could see that as an expensive proposition when the medium grade lattes already cost $5.00.

Starbucks has to walk a fine line between speeding up the process of making coffee drinks and bringing to an end the contact between baristas and customers which has become one of the most enjoyable parts of making a purchase at the worldwide chain of coffeehouses.

The outline of Johnson will lay out on Wednesday should give a better idea as to where the company is headed with its mobile ordering app.