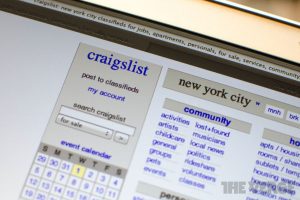 Craigslist, the popular online classified ads site has stopped the publishing of personal ads on its sites after the U.S. Senate passed a controversial bill involving sex trafficking that would make website operators more accountable for the activities of their users.

The personal ads on Craigslist have for several years been a very popular way for people to hook up romantically, but with the approval this week by the Senate of the new FOSTA Act (Allow States and Victims to Fight Online Sex Trafficking Act), Craigslist announced it could not afford to risk its overall operations by having personal ads.

Craigslist through a prepared statement said that any service or tool can be misused. We cannot take a risk without putting all the other services in jeopardy, so regretfully the personal ads will be taken offline, but the hope is that they can one day return.

The new legislation, approved by both the House and Senate, amends the Communications Decency Act’s Section 230, which many platforms online saw as important protection from liability for content that their users posted. The new legislation makes operating an internet platform a crime when its intent is to promote prostitution.

Supporters said that the new legislation would help to curb the increasing epidemic of sex trafficking online that often includes young children. However, opponents argue it could expose technology companies to lawsuits and could infringe on the freedom of speech.

The legislation arose as an effort to combat sex trafficking online often perpetuated on sites such as Backpage.com that has classified advertising in which people are able to solicit prostitutes.

According to child advocates many people on that website are women and children who have been trafficked.

A group that advocates digital rights Electronic Frontier Foundations was opposed to the legislation saying it makes sites responsible for the speech as well as behavior of their users as well as that of their own.

The Foundation warned that facing threats of extreme civil and criminal penalties, web platforms small and large alike would have little choice but to silence legitimate voices.

Before the legislation becomes law it must be signed by President Donald Trump. It is not known when the measure is expected to arrive at the desk of the president for his signature.