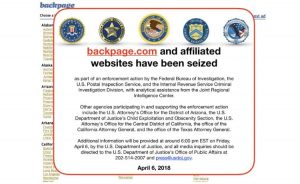 Law enforcement authorities in the U.S. have seized Backpage.com the website that was a sex marketplace as part of a Federal Bureau of Investigation enforcement action, according to Friday’s posting on the landing page for the website.

Political leaders and groups diligently working to bring an end to child exploitation and forced prostitution applauded the shuttering of Backpage, the huge ad marketplace primarily used for selling sex.

However, some free speech and internet advocates warned that this action may lead to harsh limits imposed by federal regulators on expression as well as the press.

The posting on the website said that U.S. attorney from California and Arizona, along with the child exploitation and obscenity division of the Department of Justice and the Texas and California attorneys general helped shut the site down.

Late Friday, the Justice Department announced that an Arizona court had ruled that the case would remain sealed, which puts legal information where it cannot be seen. In the posting related to the seizure, the department originally had said more information was forthcoming to the public.

An FBI official in Phoenix said law enforcement action was taking place at a Sedona, Arizona home that is owned by Michael Lacey, one of the Backpage founders, but said any further inquiries needed to be directed to the Department of Justice.

Senator Heidi Heitkamp took to social media tweeting that Backpage has been shut down representing a huge win, as now no child will be sold for sex via that website.

Senator Heitkamp helped to draft legislation that the Senate passed in March making it easier for state prosecutors as well as victims of sex-trafficking to sue advertisers, social media networks and others that do not keep exploitative materials and sex trafficking off their sites.

Next week the bill becomes law after the president signs it, said Heitkamp. This legislation amends the existing Communications Decency Act and was prominently featured in “I am Jane Doe,” the popular documentary on Netflix. The CDA has shielded operators of websites from criminal charges and civil liability if they facilitate prostitution or sex ads.

Advocacy groups and Backpage say that ads are a form of free speech that the U.S. Constitution protects.

Backpage has nationwide affiliates as well as others across the globe. It has been reported that back in 2014 the site and affiliates were generating $135 million in annual revenue.