XEROX CEO Steps Down as Deason and Icahn Win 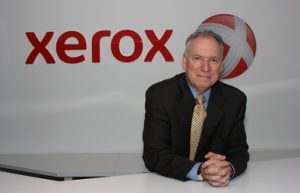 The Xerox CEO is stepping down and the company’s plan of being taken over by Fujifilm is now in doubt.

Late Tuesday, Xerox announced that it had come to an agreement on a deal with it activist investors Darwin Deason and Carl Icahn, who have tried to kill the deal with Fujifilm and push CEO Jeff Jacobson out.

Under the deal, Jacobson as well as six other current board members of Xerox, including Robert Keegan the chairman, will step down in order for representatives of Deason and Icahn to take over control of running the U.S. based copier and printer company.

The board at Xerox said that it decided to enter into this deal with its activist investors after a judge temporarily blocked the planned merger Xerox had with Fujifilm on Friday.

The judge’s ruling came as a result of Deason filing a lawsuit in February that challenged the merger. Tuesday’s agreement by the two sides will end that litigation and the battle over seats on the board that would take place during the next shareholder’s meeting for Xerox, said the company in a prepared statement.

The new Xerox board will meet immediately to discuss the terminating or restructuring of the relationship of Xerox with Fujifilm and the transaction pending with Fujifilm, said the prepared statement.

However, it will face a big fight from the Japanese based company, which in its own statement on Wednesday said that it had serious concerns about the new settlement reached between Xerox and its activist investors.

Under a plan that was announced during January Xerox and Fujifilm, the operations of the U.S. company would be merged with Fuji Xerox, which is a joint venture between the two companies. The deal worth multibillion’s of dollars would have Fujifilm the majority share owner with 50.1% and shareholders of Xerox with the rest.

Deason and Icahn argued that the deal dramatically undervalued Xerox. The two activist investors who together have 15% of the stock in Xerox accused its board of overseeing Xerox’s systematic destruction.

On Wednesday Fujifilm said that it believes the board at Xerox is obligated to stick to its deal with Fujifilm that the two reached in January.

On Wednesday shares of Fujifilm were down over 5% in trading in Tokyo.