Shares of Air France Plunge After Resignation of CEO 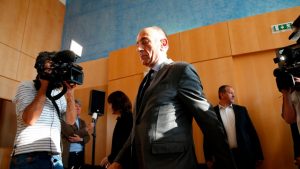 Shares of Air France-KLM Group plummeted in Paris after CEO Jean-Marc Janaillac resigned last week which threw the biggest airline in Europe into disarray, as strikes continue and senior politicians warn that the survival of the company is at stake.

Stock fell by up to 13%, the most in close to two years. Even prior to Monday, shares lost 40% in their value.

On Friday, walkouts led to Janaillac resigning and those have continued into this week, with close to 15% of the airlines’ services cancelled on Monday, it said through a post on its official website.

While nearly all of its long-haul flights should operate without cancellations, one in five of its medium-haul flights out of Paris’ Charles de Gaulle airport will not.

At the same time its short-haul flights leaving Orly have also been affected. On Tuesday this sort of action is expected to continue with the airline saying there will be additional disruptions.

Janaillac has announced that he will hand over his resignation May 9 to the company’s board of directors. Analysts compared the rejection of the pay proposal by airline management by workers to pressing a self-destruct button. On Sunday, the Finance Minister of France Bruno Le Maire said that the demands by the workers were not justified and urged them to show signs of responsibility.

On Friday, Air France said that increasing expenses of jet fuel and the stronger Euro had and will continue to have a burden that has been caused by several walkouts by the airline staff that is fighting to receive higher wages.

Janaillac put his CEO position on the line when workers voted on management’s latest pay offer and he lost the bet as workers overwhelmingly rejected the airline’s proposal late Friday.

Air France announced that travelers will like experience delays and or cancellations that are last minute. The airline added that it would update its Tuesday flight schedule late on Monday.

No word has been released as to when another offer would be made by the airline to its workers or if the walk out would be extended.