Europe Shoots Back at U.S. Over Steel Tariffs 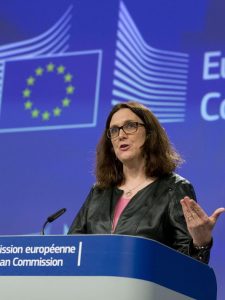 Europe has already taken a shot at the U.S. over the new tariffs on aluminum and steel products. Officials in the European Union filed a formal complaint on Friday with the World Trade Organization, which is the first of several measures that are designed to hit back at the U.S.

Tariffs are next in line. The EU is planning to place 25% tariffs on close to 200 American products that included orange juice as quickly as June 20. Bourbon, denim, motorcycles, motor boats, cigarettes and even peanut butter are amongst those products expected to be slapped with new tariffs.

The exports from the U.S. targeted in the EU’s initial wave of retaliatory measures are worth approximately $3.3 billion yearly said EU officials.

The U.S. on Friday placed tariffs on aluminum and steel from Canada, Mexico and the EU, in a move the White House administration justified on the grounds of national security.

Trade Commissioner at the EU Cecilia Malmstrom called the U.S. approach nothing more than protectionism and described the tariffs as illegal under trading rules of the WTO.

A second lot of American exports with a value of up to $4.3 billion per year could be eventually targeted. That list consists of nearly 160 products including sunbeds, corduroy pants, porcelain tableware and paper towels that could be slapped with tariffs from 10% to 50%.

The products would receive tariffs if the WTO makes a ruling that the U.S. aluminum and steel tariffs were illegal. If the WTO does not issue a ruling within the next three years, the tariffs could be unilaterally implemented.

Officials in the EU said that the total value for goods that are targeted is a dollar for dollar response to the tariffs placed by the U.S.

The stakes are high when it comes to trade wars. The U.S. and the EU trade more than $1.2 trillion each year in goods and services.

Experts in the industry warned that a retaliation by the EU could encourage the White House administration to place more tariffs on items such as cars from Europe.

Malmstrom said the U.S. was playing a very dangerous game and we do not seek to escalate this situation, but a response needs to be carried out.

Last month the Secretary of Commerce for the U.S. Wilbur Ross said that the after speaking with the president, he would launch an investigation of whether automobile imports were hurting the national security of the U.S.