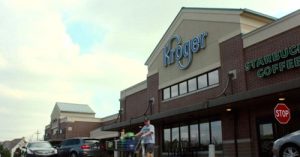 Kroger Co. posted profit that was sharply lower as the largest supermarket chain in the country slashed prices while investing in technology to help it maintain pace with increased competition amongst grocers.

The grocer, based in Cincinnati said its sales turned positive during the second quarter that ended August 12 and confirmed its guidance for profit for the full year.

Shares of Kroger were down 8% during premarket trading on Friday, prior to recovering slightly at the opening bell.

A small increase of 0.7% in sales at same-stores beat expectations by analysts and ended two straight quarters of drops in that key metric.

A record run of dropping prices of food that sparked discounting wars on staples such as eggs and milk hit the supermarket chain hard. Prior to the downturn, Kroger’s sales at same stores had increased each quarter for 13 consecutive years.

Food distributor and retailer stocks have tumbled as well this summer after Amazon.com announced its acquisition of Whole Foods Market. Shares of Kroger have been hit worse than the average. The stock for the grocer has dropped 36% in 2017, while the S&P food retailers are down 16%.

Kroger reduced its building of new locations to put the money into maintaining prices lower, and announced on Friday it was cutting capital spending by $600 million over the next two years.

Since the Amazon and Whole Foods merger went through a week ago, Amazon has cut prices for staples at Whole Foods nationwide, including such items as bananas and eggs that help to drive store visits.

Amazon has begun to start stocking its new Whole Food stores with store brand products which is yet one more headwind Kroger could face, given the importance of organic and natural goods for its overall sales.

Kroger stores do not have the same amount of overlap with Whole Foods that are more concentrated in cities as well as affluent suburbs, but industry analysts expect less expensive prices will stoke competition amongst retailers.

Profit at Kroger during the quarter dropped 8% from the same period one year earlier. It confirmed its guidance for the full year of between $1.74 and $1.78 in earnings per share.

Kroger posted revenue of $27.6 billion during its second quarter with a profit of $353 million. The third largest market for Kroger is the area of Houston, Texas where there are 115 stores, and fallout from the hurricane is expected during the ongoing quarter.