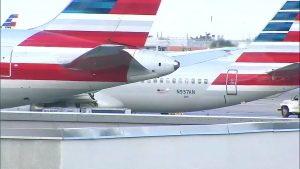 An employee with American Airlines at Sacramento International Airport has likely saved a pair of teenage girls from a life of captivity.

Denice Miracle a customer service agent with American Airlines felt something was not right when two girls ages 15 and 17 from the nearby area of Vacaville-Fairfield arrived at her ticket counter.

The girls did not have identification, were not accompanied by adults and had a pair of first-class one-way tickets booked by someone else with a credit card that was fraudulent says the airline’s new release.

The two together had several small bags. It appeared to the service agent they were running from home. They kept looking at one another in a manner that seemed anxious and fearful and Miracle said her gut feeling told her something was awry.

When Miracle would not allow the girls to fly, they walked to a nearby table at Starbucks and one of them called someone on the phone. At the same time, Miracle called the Sheriff’s Department’s Airport Bureau. The girls made a call to “Drey” who they had reportedly met earlier via Instagram.

Drey offered to fly both girls to New York over a weekend and to pay each $2,000 for modeling and appearing in music videos. However, it seemed odd that Drey did not bother to buy a return ticket for the girls from New York back to Sacramento.

Following the initial conversation by the girls with Drey on the phone while at Starbucks, his phone stopped working and he deleted the Instagram page he had in just minutes.

Most likely Drey did not use his own photos and would not likely be prosecuted outside California, but thanks to the awareness of the American Airlines agent, the girls were headed home with their parents from the airport and not headed to New York on a flight.

Law enforcement officials said that if Miracle would not have called after feeling uncomfortable about the situation, they would not have intervened and the girls would have left the airport alone.